A tribute to Rutan
“The time has come, my little friends, to talk of other things
Of planes and charts and GPS,
of pilots and legends
And why the sky is bright blue, and whether pigs have wings
Calloo, Callay, come fly away / With the pilots and legends.”

It is that time of the year again, when the center of the world tilts northwards towards a small town in Wisconsin called Oshkosh. You might have thought there are only unhappy cows there and cheese, but for one week at the end of July, this small town of 66000 population is transformed into a mecca of aviation’s greatest celebration. 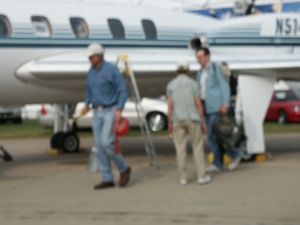 Each year the Experimental Aircraft Association (EAA) outperforms itself. Year after year people return to participate in this celebration: be it to celebrate 50 years of Airventure, Centennial of Flight, Launching the next century of flight, or simply to be a part of and enjoy the simple joy of flying and be inspired.

This year marks a tribute to the living legend: Burt Rutan. This year marks the 25th anniversary of the Voyager aircraft around the world flight. Rutan, founder and CEO of Scaled Composites, famous for many innovative aircraft designs such as: VariEze, Long-EZ, Boomerang, Voyager, Global Flyer, SpaceShipOne and more recently SpaceShipTwo announced his retirement early this year.

Rutan is one of the greatest living aviation icons and visionaries. An alumnus of California Polytechnical State University (CalPoly) San Luis Obispo, he founded Scaled Composites at Mojave Airport in 1982. He was inducted into the EAA Hall of Flame in 1998. A great orator, and an enduring inspiration: no trip to Airventure is complete without attending a session by him. To commemorate the occasion, a gathering of Rutan designed aircraft is being planned. Various aircraft will also be on display. There will also be special programs at Theater in the Woods,  and other presentations.

No trip to Oshkosh is complete without visiting the Seaplane Base, EAA Museum, afternoon airshows, walking the flight line to see the aircraft display, snagging a ride in the Breezy and/or the Ford tri-motor, night airshow and fireworks, Saturday morning 5k, musical shows (this years list includes Aaron Tippin, Gary Sinise, REO Speedwagon), nightly movies (this years list includes Apollo 13, Airplane, Clear and Present Danger, True Grit, TopGun),  and many more. Take a moment to visit eVenture (the future of electric flight), WomenVenture, and KidVenture. This year also marks 100 years of naval aviation. An Old Glory Honor Flight and a Salute to Naval Aviation with former astronauts and navy pilots is also planned.

So start packing those bags and fly away to OSH!