The air rushed at us as Mike eased the stick back. Whoa! This must be how Orville felt on that fateful day in December in Kitty Hawk when he lifted of the ground. The Breezy is no comparison to the Wright Flyer. The original Breezy was designed by Carl Unger. It is a “no cockpit” aircraft with a set of modified PA-12 wings and a continental engine. After almost 40 years of giving rides the original Breezy was donated to the EAA Airventure Museum.

As we lifted off into the wind, I grabbed the edges of my seat, feeling the rush of air and adrenaline. With just a seat belt to hold me down, a pair of goggles and a headset to reduce the noise, I felt suspended in space, the safety belt between me and the ground! Looking down at OSH, I wished my flight had been earlier in the week, when I could see the buzzing activity of the crowds, and the thousands of aircraft parked on the field. 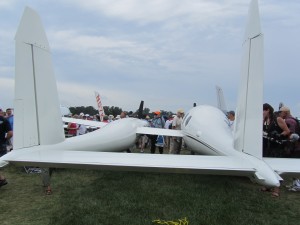 The static displays were starting to thin, as the Saturday morning departures started. Parallel departures were in progress under the careful watchful eye of the ATC in the tower and on the ground. Too soon, we turned final and landed on the the parallel runway; weaving our way back slowly behind the Oracle Challenger as it made “S” turns and taxied back, and steering clear of the long departure lines.

Thursday started with the drive up to OSH, setting up camp and rushing off to hear Rutan speak at the EAA Airventure Museum. Thursday was earmarked the “A Tribute to Rutan” day at Airventure. Next up was the “Rutan Designs” presentation at the Conocco Phillips Plaza beside the Rutan design aircraft on static display. A Rutan favorite, the newly restored Boomerang was also flown in from Mojave and flew during the afternoon airshow. To cap off the perfect day, an evening tribute to Rutan was organized in the Theater in the Woods.

This was the first year that I had devoted almost four days to Airventure. We got ample dosage of airshows, Rutan talks, aircraft display and even snagged a ride in the coveted Breezy. While I did not quite make it to the 5k race, we roused ourselves early Saturday morning to catch the Balloon launch albeit they did not fly that morning! I even managed to make it to the photo shoot for the Womenventure on Friday.

No trip to Oshkosh is complete without visiting the Seaplane Base, spending the afternoons under the heat (or rain), gazing at planes in the afternoon airshows, walking the flight line to see the static aircraft displays, checking out the ultra lights, the warbirds, the fighter jets, or anything that flies be it the lighter than air dirigible, the balloon, the ultralight, warbird, the flying car, the electric aircraft, the light sport aircraft, the figher or the latest commercial aircraft (B787 dreamliner). Neither is it complete: without snagging a ride in the Breezy, an ultralight, a seaplane, a bomber and/or the Ford tri-motor, or any willing pilot benevolent enough to take you flying. Or being dazzled by the fireworks, lights and the iridescent night airshow, gathering up the energy for an early Saturday morning 5k or balloon launch, musical shows (this year’s list includes Aaron Tippin, Gary Sinise, REO Speedwagon), nightly movies (including Apollo 13, Airplane, Clear and Present Danger, True Grit, and Top Gun), and many more memorable occasions to celebrate and participate in the joy of flying.