Aruba, Jamaica,
Ooo I wanna take you
Bermuda, Bahama,
Come on pretty mama
Key Largo, Montego
Baby why don’t we go
Jamaica off the Florida Keys
Theres a place called Kokomo
Thats where you wanna go to get away from it
—-The Beach Boys

The song was ringing in my ears, and before I knew it I was grinning. The song has been on my mind the last 2 or 3 months, ever since the first kick-off meeting actually.

Last year a group of pilots in the Mid Atlantic had made the trip out to Bahamas. So when my flight school started the planning for the second annual Bahamas trip, I was intrigued. The kick-off meeting was right after Thanksgiving and 12 happy pilots in 10 aircraft were willing, committed and ready for some Bahamas Mamas, kaleidoscope of oceanic hues from turquoise to deep blue, white sandy beaches, sunshine and so much more. Who wouldn’t want to forsake some of the arctic freeze prevailing in the area, for some paradise in the tropics, even if only for a week? In order to fly to the Bahamas there are some key things to plan ahead of time:

Items 1-4 should be obtained 2-4 weeks in advance. We planned to rent life vests in Fort Pierce at the Airport Tiki which has plenty of life vests available for rental. Of course you also need a valid US passport. The AOPA website contains a wealth of information on private flying in the Bahamas. 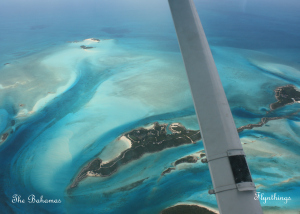 A total of eight aircraft were planning to travel from the Mid Atlantic region and rendezvous at St. Lucie Airport in Fort Pierce, FL (FPR). Due to unfavorable weather conditions on the day of departure, only 4 aircraft managed to rendezvous on the intended day, Feb 1st, 2013. As providence would have it, the other 4 aircraft convened the following day and departed in sequence, a day later than planned, to the Bahamas. My co-pilot, Linda Knowles, and I departed in our rented Cessna 172 G1000, a day later than originally planned and raced against time to make it to FPR just as the sun was setting. We covered almost 850 nm in 8.5 hours with two pit stops at Florence Airport (FLO), SC and Ormond Beach Airport (OMN), FL on day 1 and made it to FPR.

On day 2, after filing our DVFR flight plan and submitting our eAPIS passenger manifest, we were the last to depart for the Bahamas. We planned to do our customs at Freeport, before heading over to Marsh Harbor for some lunch and fuel. We departed VFR from FPR, and opened our DVFR flight plan with Miami Radio and were fortunate enough to pick up flight following with Miami Center. Initially we flew at 5500 ft, but 20nm out, started to encounter some clouds at our flight level and opted to climb to 7500 ft. After that, it was just the ocean, the sky, the clouds and us for 40 nm. Seeing land, through a large hole in the clouds, some 20nm from Freeport was the most endearing sight to our eyes. Miami center bid us adieu and we transferred to Freeport Tower, who reeled us in to our first landing in the Bahamas. It was as simple as that. Customs were a piece of cake and before long, Linda and I were off again.

This time we flew across the Grand Bahamas Island direct to Treasure Cay, before turning south to land at Marsh Harbor in the Great Abaco Island. Lunch and fuel later, we were off again. Traveling airport to airport over the Great Abaco Island, Eleuthera, Cat Island and finally to Stella Maris airport on Long Island. Our goal was to fly and land at as many airports as we could and experience the Bahamas from the air. Stella Maris Resort is the closest resort to Stella Maris airport on Long Island. As we announced our intent to land, our taxi was ready to transport us to the resort. There are no keys to the rooms here. No locks. And it was terrific to keep the double French doors open during the night to hear the waves crashing! 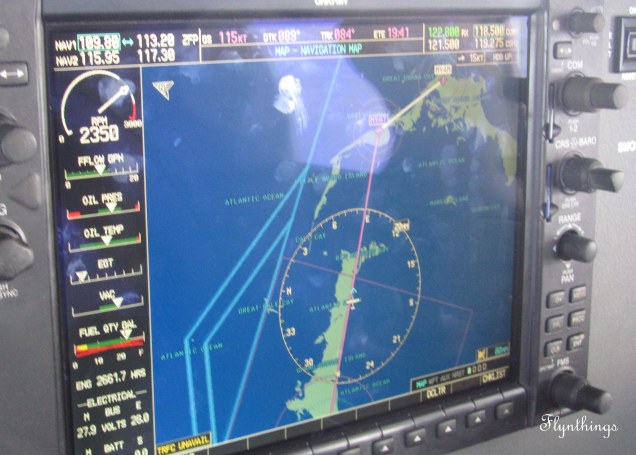 Daily activities are organized by the resort such as day trips to the nearby Deal Beach, diving, and snorkeling cruises. Linda and I rented a car the following day to explore the island. There is only one main highway. Although we had detailed directions provided by Alissa from the resort, it is extremely easy to get lost.  Linda and I can attest to that! We did manage to make it to Dean’s Blue Hole, the deepest hole in the world at 660ft. An alternate resort, just 7km south of Stella Maris, is the Santa Maria resort that has a beautiful white sandy beach and a dirt strip. 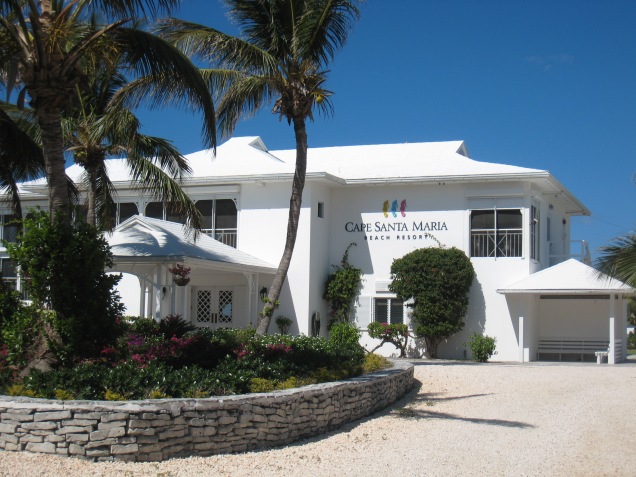 Day 4 dawned bright and clear. Linda and I set off after breakfast. This time tracing some of the most beautiful and exotic islands of the Bahamas: The Exumas. The shades of blues were ineffable. So much beauty abounds, that mere words do an injustice to describe all the emotions that ripple through you when presented with so much pulchritude. We landed at Nassau this time to do our exit customs and the return journey to the States. Our plan was to fly to Key West (KEYW), FL and use that as our port of entry. This meant traveling almost 200nm, over the ocean with no land in sight. This provided some extreme lessons in instrument flying. It was hard to tell where the sky ended and the ocean began. With no ground references, we had to rely solely on our instruments to show us the way home. 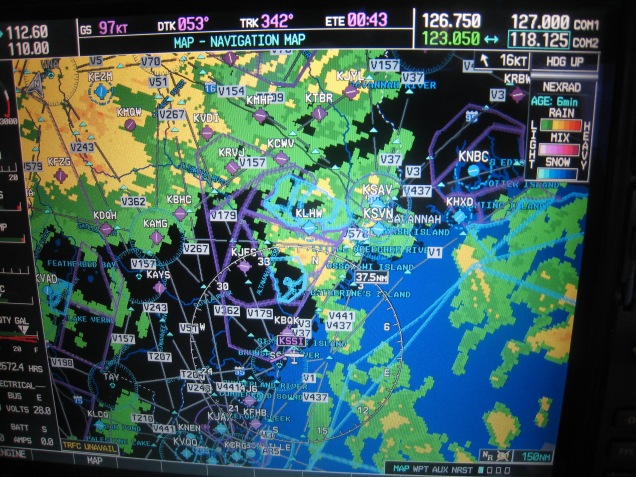 Day 6 dawned bright and clear, at OMN where we had stopped for the night on our return from the Bahamas and Key West. It was going to be the last day of our trip. Weather permitting we expected to be home in the Mid Atlantic that evening. After topping off at the self serve, we departed and raced north: this time, to stay ahead of winter storm Nemo. With tailwinds, there were times when we recorded almost 144kts ground speed. At times, we thought it was possible. There were gaps in the radar images. If we got as far north as Lumberton, NC before the storm arrived, there was still a chance we would be able to get home that evening. The best route north was to stay ahead of the storm, and this meant over the ocean.  What chances did we have over open water? We had already returned our vests at Fort Pierce. Instead we tried to sneak behind and headed towards Jessup Wayne County Airport (KJES), GA. It almost looked like we could get as far north as KJES or so we hoped.

“What are you intentions,” asked Jack Center again as we tried to head toward KJES.  ”Restricted areas 3007 are active”.

“How about a vector?” I asked. The new heading put us almost on a course for Malcolm Mc Kinnon Airport (KSSI) in Brunswick, GA, which until a few minutes ago had been reporting IFR. We listened to the ATIS again. The storm system ahead was already bringing rain and thunderstorms at Savannah, GA. We knew we had to act quickly. If we missed KSSI, we would be over the ocean and there would be no place to run from Nemo. There was a time for a challenge and a time for caution. This was a time for the latter.

“Jack Center, I think we are going to land KSSI,” I said.

And so we landed there. Maybe we could have gotten a little further north. But Nemo was bigger, faster and ahead of us sooner than we anticipated. We had time to wait it out. It was prudent to do so. After lying low for two days at St Simons Island, Linda and I finally made our way back on day 8. What an adventure!

We faced many challenges and learned many lessons during this week long trip. Dealing with the requirements for crossing the Air Defense Identification Zone (ADIZ), filing international flight plan and handling paperwork to prepare for the trip provided ample lessons in flying across the border. Rain, snow, strong winds, thunderstorms and IMC conditions provided delays and discussions on weather based decision making. Flying hundreds of miles across the ocean with no visual references can be as challenging as flying in actual IMC conditions. Racing against winter storm Nemo and knowing when to call it quits provided the ultimate lessons in weather decision making. Over eight days, Linda and I traveled from the Mid Atlantic to Florida, over the Atlantic Ocean to the Bahamas, flying over the Grand Bahamas, The Great Abaco, Cat Island, Long Island, The Exumas, and Andros Islands before returning home via Key West, Ormond Beach, FL and St Simons Island, GA. We covered more than 2,500nm, dashed through 5 states (VA, NC, SC, GA and FL), and flew over several of the Bahamas islands. There are 29 islands and 57 airports in the Bahamas. Linda and I barely scratched the surface.

There is plenty to do and see out there. I definitely hope to make it back there again one day! The complete day-by-day recount of this incredible adventure can be read on my personal blog:  https://flynthings.wordpress.com/the-bahamas-adventure/

As always you can read my day-by account of my two trips to the Bahamas in a C172 on my personal blog.