After several turns about a point over Paradise Island, we were finally cleared to land on Runway 14. But the wait was not done. We had chosen the Odyssey Aviation FBO on the opposite side of the field from the main terminal at Nassau Lynden Pinding International Airport. This meant we had to wait: while commercial jets landed and taxied off to the ramp; before Tower could clear us to back taxi on 14 (expedited) before we exited on the right to the FBO.

Although we had landed here last year, we had merely got lunch, fuel and done our exit customs before we had flown back to the States to Key West, Florida. In retrospect, I think we had used Executive Flight Support last year, that was on the terminal side of the airport. After a wait sorting our transport to the Paradise Island Resort where we expected to spend the night, we finally got there in a cab, weaving past traffic, that almost reminded us of any major US city. Brand name commercial stores in downtown Nassau such as Gucci, almost made it feel like we were back on Park Avenue sans the skyscrapers.

A new resort is in the making on Providence Island to compete with the Atlantis on Paradise Island. If traffic was bad now, I wonder how it will be a year from now when the resort is ready?

After a short meal at the resort (we had no lunch since our breakfast at FBV), we headed out towards Atlantis Resort. The Aquarium at Atlantis was known to be free after 6:00pm. After walking the short distance from Paradise Island resort, we made it to the Atlantis resort. Unlike the out islands where everything was open and there was no locks and key, in Nassau and Paradise Island, like any metropolitan city, things have to stored under lock and key. Mugging, and petty theft on the streets are common. Resorts were packed and crowded. I realized then, why people preferred the out islands. 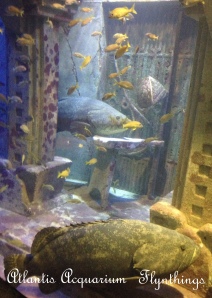 The Aquarium at Atlantis was really nice to stroll through. The beach at night was deserted. There were no musicians that entertained the guests as they did 20 years ago. There were no beach events as Linda remembered from before.

After a short stroll through the marketplace, looking at shops, we made the short trip back to the Paradise Island Resort, for a late dinner. It was nothing compared to the Fernandez Bay Village. But I needed to see it once to know the difference.

Night in Nassau? Absolutely. My last one!

One thought on “Night in Nassau”