There was no response from the cockpit. Barely a few seconds later I heard,

” Indy Center, Nxxxxx”.
“Go ahead, Nxxxxx, ” Indy Center responded.
“I want to declare an emergency. I am unable to maintain altitude, I want to land Parkersburg”
“What’s the problem,” queried Indy Center.
“I don’t have manifold pressure….I am losing engine power,” responded the pilot. 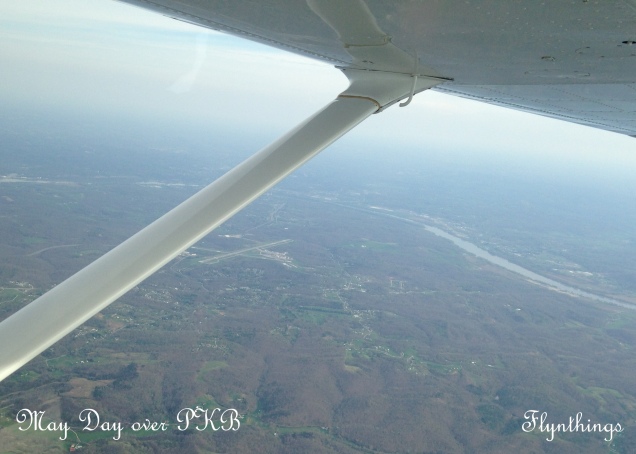 May Day is the prescribed distress signal that a pilot transmits in an emergency. It is the equivalent of SOS.  Once uttered, air traffic control (ATC) will go to unlimited lengths to provide guidance, and help the pilot, and make any and all attempts to bring the pilot and passengers safely down. Another handy term is Pan Pan. If you are in trouble, but it is not life threatening, you can use Pan Pan. This conveys, to rescue personnel that, it is not as urgent as the May Day communication.

There was a time, when pilots were reluctant to use these very useful tools when they were in trouble. Declaring an emergency doesn’t get a pilot in trouble, in fact, it brings forth incredible amount of help from ATC.

Practicing simulated emergency procedures  is an important part of flight training. It is also one of the key things that are reviewed during a Flight Review or during recurrent training. Pilots review and practice emergency situations from engine failures, to loss of electrical power, to engine fires and other potential, unexpected incidents, to be prepared to handle such situations when and if they occur.

Still, every pilot hopes it is one of those things, that will never happen to him or her!

The weather on Sunday proved iffy. Not only was a weather system expected to move in bringing rain, instrument conditions and poor visibility, but also winds were expected to pick up by noon gusting as much as 40 knots. Throughout the weekend we had monitored the weather and had decided earlier on, that the best plan was to depart SGH as early as possibly, to allow us to stay ahead of the storm.

As planned the two aircraft departed well before our original planned departure time of 8 am.

Barely an hour into our flight, we heard a thump. That day, the stars were perfectly aligned for us. While I would hope to never experience an engine out, if it did, these were the perfect conditions to experience it:

Exactly a little over seven minutes after declaring an emergency at 9,000ft, under reduced power we descended and landed safely on the longest runway at Parkersburg Airport (PKB) in West Virginia, without any further damage to the aircraft or inconvenience to passengers. It could have as well been a perfect example of a simulated engine out practice flight.

There is a world of difference between a simulated engine failure and an actual in-flight engine failure. In this particular situation, I was merely an observer, but there are many things to learn from any incident that one is involved in:

The incident threw an unexpected  curve ball. It required us to hanger the aircraft, and rent a car so we could drive back to our destination. It implies untold expenses to the pilot owner to figure our the cause, and fix the airplane, before it can be flown back to its airport home base.

Only later we realized, once we were past PKB, there was no airport within easy gliding distance along our route. In truth, that day each one of us was fortunate.

Any incident/accident that one walks away from is a blessing.