Lately the weather has not been cooperative, at least not on weekends.

Weeks ahead, I had reserved an aircraft, and planned the flight to Hampton Roads. We had a good group of 4-5 aircraft with 10-12 people all set to go. Then the weather gods intervened with: “Thou shall not fly!”

The forecast was awful, more severe than what actually transpired on the day. But the damage was done.

As an after thought, I had reserved an aircraft for the following weekend as a back up plan. My weekends are typically consumed with school work. But,  I wanted to squeeze in a flight if I could, if not anything to stay current.  The forecast was looking good. I didn’t want to say it out aloud, lest I jinx myself.

Gert and I set off early, an hour later than planned but early to beat the heat. The highs on Saturday were expected to be in mid 90’s. Because of the intense heat, there was a possibility of severe thunderstorms in the afternoon. As we departed, we could sense a change in winds.

First stop: Winchester. Young eagles were in full force. There were several aircraft in the pattern, arriving or taxing for departure. Rather than a straight in which is what we had planned, we setup for a 45 entry and attempted to follow another aircraft, which unfortunately had to go around since we were close behind and another was attempting to takeoff.

Once we landed, efficient ground personnel directed us to the terminal building, where we hopped out and collected our first stamp of the day. It was going to be a busy and long day for EAA, with 120 eager kids and only 8 aircraft available to offer rides.

Next stop: Front Royal. If I thought my landing at OKV was decent, this one barely made the cut. As Gert put, “good recovery”. Winds in the Shenandoah Valley were getting a little squirrely. Another stamp and we continued on, waiting for glider departures.

Third stop: Luray. I wont even talk about this landing. You know what people say: from good to bad to worse 🙂

Luray is a great place to fly to to visit the famous Luray Caverns in the Shenandoah Valley. While you can certainly drive there, which I have done in the past, it is a lot more fun to fly in. Just be aware of the squirrely winds. As the airport manager waiting for us told us: “Hey you lived to tell the story!” He is also happy to drop off people at the Caverns and pick them up for the return back to the airport. The caves are excellent and there is a cafe there for the $100 hamburger.

Being on a tight schedule, Gert and I hoped back on for the short trip to New Market and Gert demonstrated his skills (especially from flying in crosswinds in Hawaii) by smoothly touching down on an unkempt asphalt runway with weeds and cracks.

Although we had hoped to cover Bridgewater airport, we headed home since we were out of time on the aircraft rental. But before we could head back, we had to await the descent of the seven parachutes as they descended over the airport! 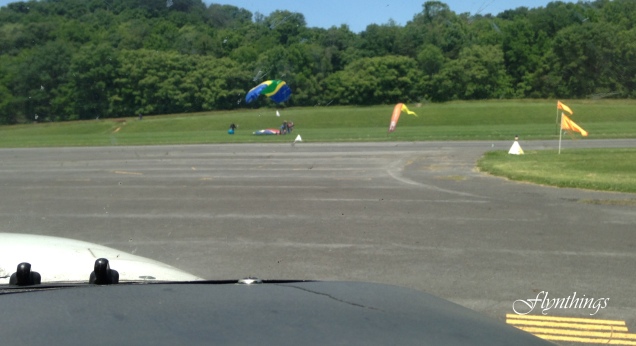 After  a hiatus of more than year, progress at last on my Virginia Ambassador stamps.

Note 1: None of these airports have restaurants, but some have courtesy cars such as Luray, and Winchester.
Note 2: Some photos courtesy Gert.