A Day at the Beach

A few days after my solo check-off and some practice solo flights, my instructor deemed I was ready to master pilotage and cross country flying. SBA is a fairly busy airport with three runways, control tower with radar coverage, and approach/departure control. My recollection of the actual flight is vague. I do remember that it was rather hectic keeping up with the aviating, navigation and communicating required to transition into a much busier airspace and airport. I was also a tiny bit disappointed that we did not stay to explore the area or even get some lunch. I was excited and exhausted by the time we returned. This particular day was memorable not only because of the excitement of having my first dual cross country flight under my belt, but also because that evening I had the opportunity to attend the first SLO99s banquet.

SBA is a fun airport to fly into. Located along the California coast, Santa Barbara  is a quaint city flanked by the Santa Ynez mountains that provide a dramatic backdrop, and the Pacific ocean. With a Mediterranean climate it is considered to be the American Riviera. It’s historic downtown is filled with white stucco buildings with red tiled roofs, with Mission Santa Barbara on a nearby hill reflecting its Spanish heritage, and upscale boutiques and restaurants. Santa Barbara is also home of the University of California, Santa Barbara. 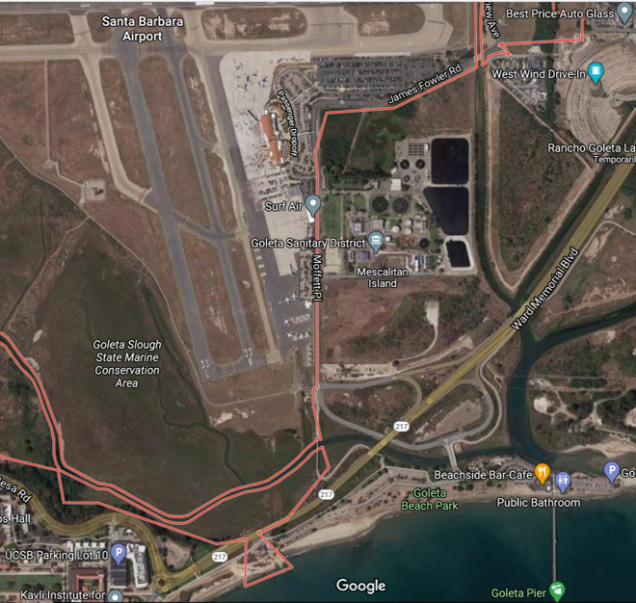 A few months after I got my PPL, I did return to SBA for some lunch and a day at the beach. While there are several amenities in the airport terminal building, tie down the aircraft and take the short trail that leads to Goleta beach where there are picnic tables, cafes, fishing pier, paddle sports, and other amenities. Pack a picnic basket or try a cafe for that coveted vege or hamburger. And don’t forget to pack your beach towel and sunscreen!